New York (CNN Business)The Federal Reserve has taken great pains to stress that its rescue of the overnight lending market is not a stealth version of quantitative easing. Wall Street isn't buying it, though.

The September spike in overnight lending rates forced the Fed to take dramatic action to relieve the stress. The US central bank began aggressively pumping in billions of dollars a day and purchasing $60 billion of Treasury bills per month. 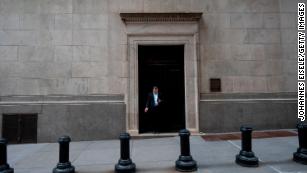 Euphoria sweeps across Wall Street. How long will it last?

The moves lifted the Fed's balance sheet beyond $4 trillion. And despite key differences, they've brought back memories of the Fed's crisis-era programs. Known as quantitative easing, or QE1, QE2 and QE3, those bond-buying programs were designed to boost the economy and financial markets.

More than half (53%) of institutional investors believe the Fed is once again engaged in QE, according to a survey released Wednesday by RBC Capital Markets. Just 19% of those investors say the Fed isn't doing QE.

The difference of opinion is not trivial or mere semantics. If investors believe the Fed's swelling balance sheet and cash injections are a version of QE, it could catapult stocks -- even if that wasn't the intended goal.

That's because, as RBC notes, previous rounds of QE coincided with periods of "higher risk taking" in the stock market. Volatility vanished and market valuations soared.

"If the 53% of our survey respondents...end up being correct, history suggests that multiples will indeed expand meaningfully," Lori Calvasina, head of US equity strategy at RBC Capital Markets, wrote in the report on Wednesday.

RBC is only calling for a "moderate" year for US stocks, with the S&P 500 rising to 3,350 by year end. That's just 5% above current levels. Market multiples are expected to be flat, while earnings are seen growing modestly.

However, Calvasina said that QE would cause a significant expansion of earnings multiples, making her 2020 market call too timid.

This line of thinking may help explain one of the forces propelling US stocks sharply higher in recent months. The S&P 500 has zoomed 9% since the end of August. The Nasdaq, a proxy for risk-taking, is up 11% over that span.

The obvious factors behind the rally are easing trade tensions and receding recession fears. Yet a growing number of market analysts believe the Fed's cash injections are also juicing the stock market.

The Fed is pumping in cash. Tons of it

The turmoil in the overnight lending market caught many investors by surprise this fall. The spike in borrowing costs signaled that the plumbing of the financial markets was broken. There was a sudden shortage of cash.

The Fed stepped in and acted like the plumber by pumping in vast amounts of cash. The strategy worked, causing borrowing costs to get back in line.

Yet the problems may not have gone away. The Fed has been forced to pump in more and more money to get the desired effects.

The central bank also promised to spend $60 billion a month through the spring of 2020 to buy T-bills, which are short-term US debt obligations.

For instance, the Fed purchased another $7.5 billion of T-bills on Wednesday in an auction that drew heavy demand. The Fed received $35 billion of bids from financial institutions, nearly five times as much as it offered.

All told, the Fed's balance sheet has surged by more than $300 billion since September to $4.1 trillion. The increase nearly reverses recent efforts to shrink the balance sheet.

The purchase of short-term debt is a key difference between today's moves and those after the 2008 crisis. Back then, the Fed kept borrowing costs cheap by purchasing long-term Treasuries. That kept a lid on Treasury rates, which serve as a benchmark for mortgages, car loans and other forms of credit.

"Our Treasury bill purchases should not be confused with the large-scale asset purchase programs that we deployed after the financial crisis," Fed chief Jerome Powell told reporters during a press conference in October. Today's moves "should not materially affect demand and supply for longer-term securities or financial conditions more broadly," he said.

Yet investors don't see a major difference. Either way, the Fed is pumping in substantial amounts of money. And investors have been trained to take risks when that happens.

"However the Fed wants to define what it's doing, market participants view this as QE4 with all the asset price inflation that comes along with QE programs," Peter Boockvar, chief investment officer at Bleakley Advisory Group, wrote in a note to clients on Tuesday.

Of course, that could make it more difficult for the Fed to stop boosting the size of its balance sheet. Doing so could spook investors, risking a market drop that hurts business and household confidence.

"It's so easy to get involved and so difficult to leave," Boockvar wrote.